We use cookies on our website. They help us get to know you a little and how you use our website. This helps us provide a more valuable and tailored experience for you and others.

You can revoke cookies at anytime at the bottom of the page.

Skip to Content
Wednesday, October 7, 2015 — Today, InnoGames released a major content update to its strategic fantasy-game Elvenar: The Dwarves. From now on, players can unlock the Dwarven Portal in their tech tree, allowing them to bring back the mystical and ancient race to their city and make use of their near-lost knowledge and technologies. InnoGames also released a video, explaining the feature in detail.

Researching the Dwarven Portal grants access to new resources, technologies, buildings and unit upgrades. Upon construction of the Portal, the first Dwarves will show up immediately - it’s now the players’ task to restore their former glory by further unlocking new materials, such as copper or granite, and making use of their unique buildings. The presence of the Dwarves and their distinctive technologies will not only influence a city’s looks, but also improve resource production and enable new upgrades for buildings and units. In the future, InnoGames will add further “guest races” to the game.

Elvenar is a city-building strategy-MMO from InnoGames, set in an exotic fantasy world. Tasked with creating a flourishing city, players can choose between Elves or Humans as a starting race. The game’s focus lies on building and upgrading a city, but players also trade or explore the world map. The choice between Elves and Humans influences the way the players’ cities and inhabitants look and which technologies and units are at their disposal. The Elves live and breathe magic and exist in close harmony with nature, whereas Humans are ambitious and determined engineers. 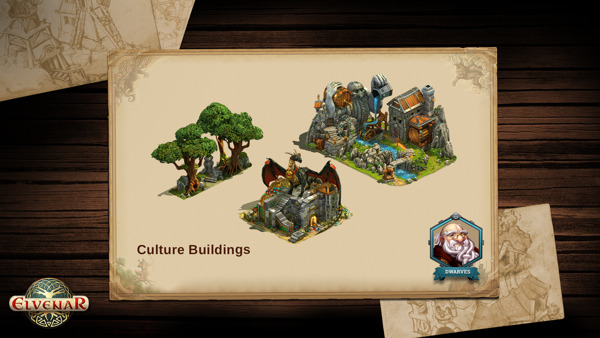